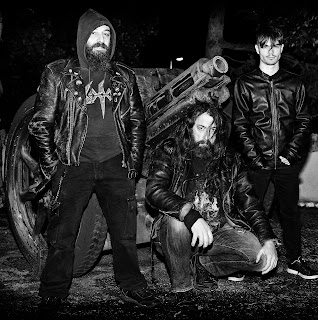 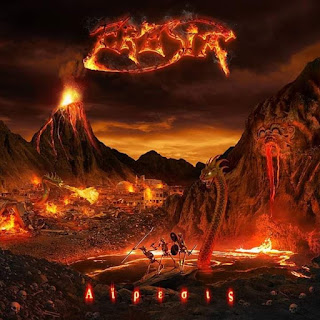 Eresia CD. “Aìresis” brutal band that we present to you this time, that from the beginning we can hear the bestiality of its sound immersed in the old school of death and thrash. This album "Aipegis" from start to an impeccable sound from start to finish. "The End, Mountain, Kult" songs that I personally highlight but if you want a true experience you must listen to the whole album without stopping and you will not regret the trip. Excellent and very consistent with the current world scene where not everything is extreme without melody, there are bands that bet and play in favor of it without losing a gram of its extreme sound. Do not stop listening to assured brutality finish is a direct hit to the liver where we can notice the brutality of the strings and a drums, although somewhat linear, very crushing and a voice that does not give up in its tearing. Death metal and thrash old school sounds are the ones that predominate on this album. Death Storm Records are to blame for the record of these Italians for such an excellent proposal. An album that pays more than every minute you dedicate to it, totally unthinkable.

DeathStorm Records …Andromeda Relix and DeathStorm Records are proud to present "Fai o Muori", a new song from the new Eresia full length entitled "Aìresis", out the 25th of January, 2019. “Aìresis” is the third album from Italian death metal band Eresia, active since 1996 with a whole career focused on the choice to sing in Italian. Despite many line up changes, Eresia have never stopped playing and after months of hard working, the band finally completed its discographic comeback, “Aìresis”, composed of 4 re-arranged and re-recorded songs taken from “Parole al Buio”, that will also contain 2 unpublished live songs and all the second album “Moto Imperpetuo”, actually sold out. For all true supporters of Italian (and worldwide) underground movement!...